Calorie inflation: the surprising truth about heirloom fruits and veggies

Want to get more nutrients from less calories? Welcome to the concept of calorie inflation. Modern seed varieties just don’t pack the same nutritional punch they used to.

Calorie inflation: why you’re eating more calories and getting less nutrition from the same food

We’ve all heard our grandparents say “when I was your age, I could buy a movie ticket for a nickel!” “Yes, grampa,” you reply, “but indexed for inflation, the cost of a movie ticket is actually a little cheaper today than when you were a kid.”

That’s how monetary inflation works. Your money will be worth less (hopefully not worthless) in one year than it is today.

Generally speaking, economists have long reasoned that moderate levels of inflation are a good thing, since it helps spur investment and consumer spending, rather than encouraging people to hide their cash under a mattress. That is, it’s good so long as people’s earnings increase at a comparable rate to the rate of inflation, otherwise you’ll eventually be unable to afford the higher cost of goods and services.

Granted, grampa might not have had good refrigeration, an electric stove, vitamin-enriched/fortified foods, or even access to a newfangled grocery store. However, the food crops that were grown in his day were far more nutritious on a per-calorie basis than the ones we’re currently using to try to feed ourselves.

To the best of our knowledge, there’s not a universal term for this phenomenon. We coined the term “calorie inflation” to describe it.

Today’s calories just don’t buy you the same nutrition they used to. Nope, this is not a good thing. 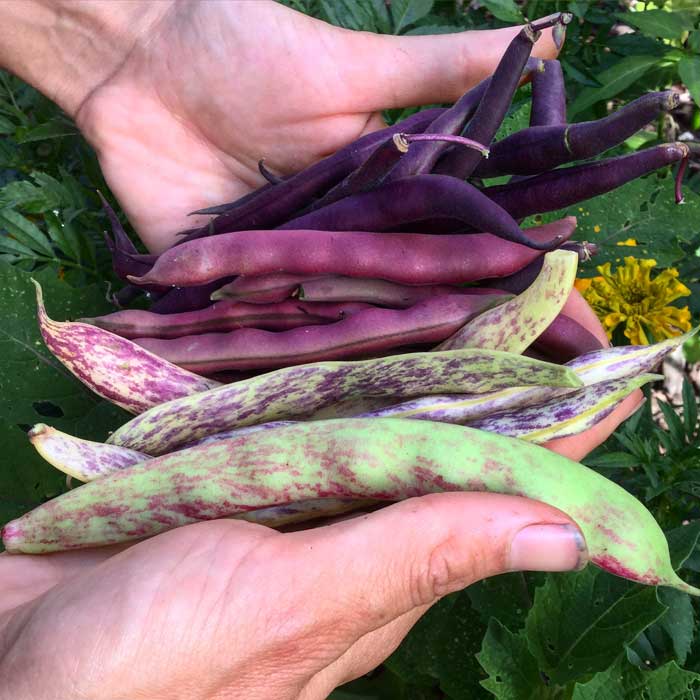 Heirloom beans from our garden. A beautiful diversity of shapes, sizes, colors and tastes.

Granted, there are lots of complicating factors such as macronutrient compositions of your food, environmental contaminants, the health of your microbiome, etc. But calories in vs. calories out is the primary factor impacting your body weight.

How we got here: the root causes of calorie inflation

We seem to hold steadfastly to the cultural assumption that the equation bigger + faster + cheaper will always = better. Therefore, the metrics by which we measure farming success and the way we assign monetary value to the crops we grow accommodate this assumption.

This approach isn’t always such a bad thing. For instance, it’s a very helpful approach when we’re trying to improve operational efficiencies on an assembly line in a factory.

However, when this approach is applied to complex biological organisms and ecosystems, it can often lead to some negative unintended consequences… 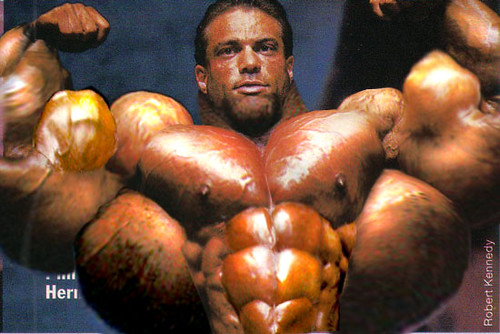 Get big or get out!

This is not a new phenomenon in agriculture. As Earl Butz, the former Secretary of Agriculture under Richard Nixon famously said, “Get big or get out!”

Granted, Butz uttered those words as a threat to small farmers who didn’t want to become megafarms, but he might as well have been directly threatening the plants and animals we grow as well.

Over the past 50-75 years, the race to make each grain of corn, soybean, apple, beef cow, etc. grow bigger, faster, cheaper has been relentless. On one hand, the results have been extraordinary: we now grow more produce (by weight) per acre than at any point in agricultural history.

We can grow massive animals in a fraction of the time it used to take. As a result, calories are now cheaper than ever for American consumers (at least at the point of purchase). These are the goals we set out to accomplish, and we have succeeded wildly.

However, where we have failed abysmally is in the areas we didn’t measure or set out to improve, either because we didn’t know about them (ignorance) or we didn’t care enough to value them (apathy).

If you know anything about modern industrial agriculture, you probably know that this approach has had a wide range of negative impacts on the environment, human health, animal welfare, and even food worker’s wages. These are the negative externalities that many experts say make our cheap food the most expensive food ever produced. (We talk more about those externalities in detail elsewhere, but they’re not the subject of this article.)

Another big negative externality of the “bigger, faster, cheaper” model is the declining nutritional quality of the foods we grow and eat. Yes, we’re destroying the biology/fertility in our soil and eroding six pounds of topsoil for every pound of food we harvest, thus rendering our arable land surfaces incapable of producing nutrient-rich foods for much longer.

We’re also (unintentionally) negatively altering the nutritional composition of our food at a genetic level.

If my financial compensation is solely based on the weight of the thing I’m producing, I’m not going to care whether it’s actually better (holistically). I’m only going to care if it’s bigger. More yield per plant and more yield per acre are the carrots (no pun intended) I’m going to chase.

If it takes weeks or months for my fruits & veggies to go from harvest to grocery shelf, I’m going to select varieties that last for a long time, pay slave labor to pick that produce before it’s ripened, and let someone else at the end of the supply chain gas the produce into ripeness before it goes on the shelf for consumers to buy.

As a farmer, I’m not going to care about the nutrition of the product I produce because I’m not compensated any more or less for that performance metric.

Making matters worse, consumers won’t buy produce that doesn’t carry the outward appearance of perfection: no blemishes and perfectly uniform color and texture are required, otherwise the item won’t make it into the shopping cart. 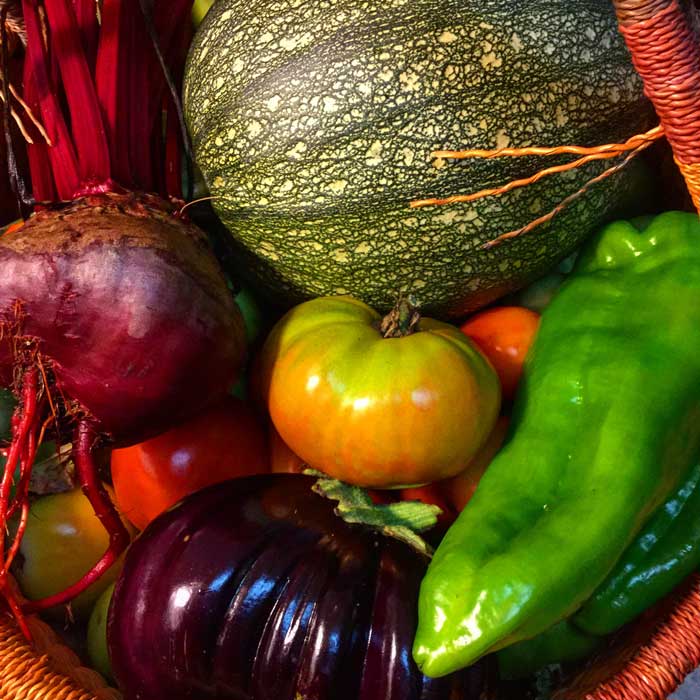 More ugly non-uniform heirloom fruits and veggies picked at the peak of ripeness and grown in rich, living soil teeming with microbes!

As a result, the modern hybrid and genetically engineered varieties that comprise the majority of the foods we feed ourselves and feed our livestock are:

As Consumer Reports recently pointed out, the conventionally-grown varieties also come with a wide range of pesticides, herbicides, heavy metals and other things you don’t want your gut microbes chewing on.

The data: impact of calorie inflation on nutrient density

Here’s just a small taste of what that loss of nutritional quality in modern crops and livestock looks like, according to some of the scientists who have studied the issue:

Davis et. al published a study in the Journal of the American College of Nutrition analyzing “nutrient content data for 43 garden crops between 1950 and 1999.”

Their analysis found “statistically reliable declines (R < 1) for 6 nutrients (protein, Ca, P, Fe, riboflavin and ascorbic acid). Declines in the medians range from 6% for protein to 38% for riboflavin.”

Modern breeds of high-production dairy cows produce milk that is less concentrated with fat (including “good” fats), protein and other nutrition-enhancing compounds.

These breeds are also more vulnerable to a range of metabolic diseases, infections and reproductive problems, which makes them more likely to require antibiotics and other pharmaceuticals. (H. Dobson et. al, Reprod Domest Anim., 2007)

Ignorance is no longer bliss

There are piles of peer-reviewed research papers that corroborate this information across multiple modern plant and animal species bred for food production. Given what we now know (and we can no longer claim ignorance as an excuse), we must aim for a more comprehensive/holistic methodology in our modern plant and animal breeding practices.

Accomplishing that objective will require one part consumer education, one part policy and regulation, and one part breeder/farmer intentionality.

If we stay on course with our reductionistic breeding and farming methods, we’ll only see increasing “calorie inflation” leading to an increasingly unhealthy population crippled by rising healthcare, social, and environmental remediation costs.

There are a myriad of factors affecting the overweight and obesity epidemics across all age and ethnicity demographics in the US and other western countries. However, one factor that we feel is under-appreciated is calorie inflation. 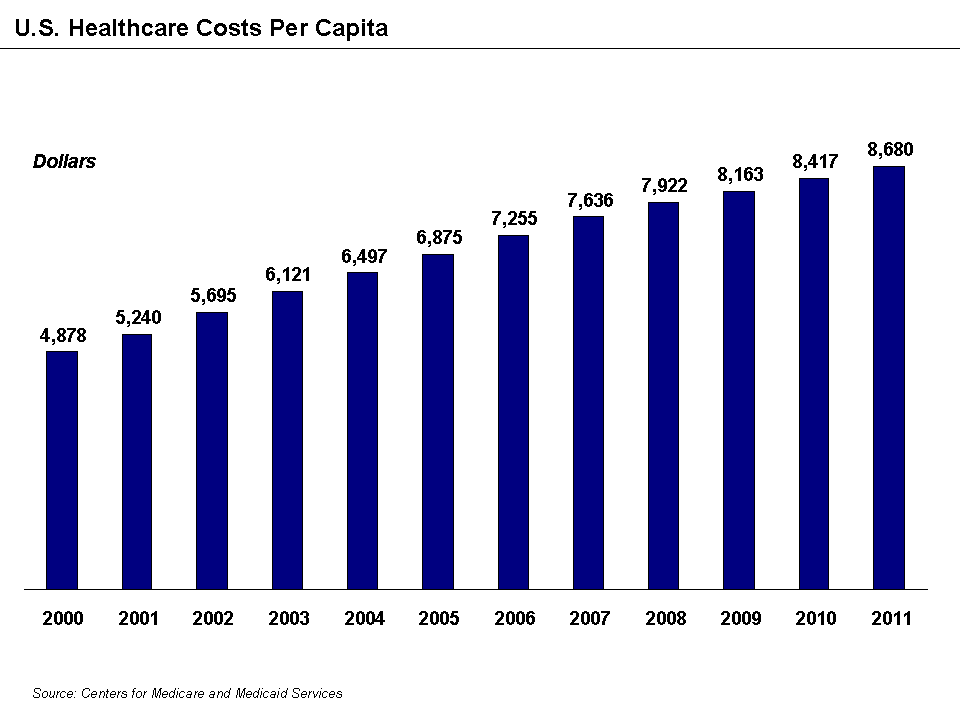 No healthcare system can make healthcare affordable if the population using that system is chronically unhealthy.

One way to fast track this approach is to reintroduce heirloom varieties into the mainstream, using organic growing methods that maximize plant/animal nutrient density and can (in the case of permaculture and agroecology) be regenerative to the health of local ecosystems.

Of course, breeding “new heirlooms” across millions of farms and backyard gardens will be important too.

Do you want to:

If you answered “yes” to the above questions, here are five things you can do today:

3. Join a CSA (Community-Supported Agriculture) wherein you contract to buy set amounts of food from a local organic farmer.

5. If all of the above don’t fill the fridge, try to buy USDA certified organic produce at your grocery store. It might not be as fresh as the food you get from the first four options, but it’s a good alternative.

What we’re recommending is better understood as investments, not costs.

Thank for reading, and feel free to ask questions in the comments section below!

Cofounder of GrowJourney.com. Aaron is an organic gardening teacher, duck evangelist, writer, health nut, and entrepreneur. He's also a farm consultant for Oak Hill Cafe & Farm, a no-till, permaculture, farm-to-table restaurant in Greenville, SC (right down the street from his alma mater, Furman University). In addition to their collaboration on GrowJourney, Aaron and his wife, Susan, are cofounders of TyrantFarms.com, a popular blog dedicated to garden-to-table cooking, foraging, wild mushrooms, heritage breed ducks, and parenting. Aaron also writes for Edible Upcountry Magazine, WordPress (.com), Daily Harvest Express, Healthy Minds and other food, health, and tech-related organizations. He serves on the board of the Diversified Agriculture Committee for the South Carolina Farm Bureau.