Looking for creative, edible uses for Halloween pumpkins? You’re in the right place! The ideas below will delight your taste buds, save you money, and help keep pumpkins out of our landfills.

Pumpkins may be one of the only foods that modern Americans still eat seasonally. It’s now standard to eat tomatoes in January, but pumpkins typically don’t make their culinary appearance until the actual harvest season, from late summer through fall.

Sadly most pumpkin recipes that are featured each fall call for canned pumpkin even though many people have fresh pumpkins sitting by their front door.

Each year, thousands of acres of farmland are used to grow Halloween pumpkins only to have tons of jack-o’-lanterns sent to the landfill once the holiday is over.

This is a waste of a valuable, nutritious, and delicious food — it’s also a waste of your money.

Pumpkins are only one small part of the staggering amount of food waste in the United States. In fact, 50% of all the food we Americans buy ends up in the trash can.

Imagine walking out of the grocery store after just having paid for four bags of groceries. Would you then immediately throw two of those bags in the garbage? Of course not!

Thankfully, there are much better uses for Halloween pumpkins than throwing them in the garbage. Once Halloween is over, we suggest you turn your jack-o’-lantern into delicious homemade food, which is a surprisingly easy way to help cut down on your food waste.

Here are twelve delicious uses for Halloween pumpkins that are WAY better than putting them in the trash:

The first step to reducing food waste starts when you carve your jack-o’-lantern. Pumpkin seeds can be scooped out with a spoon, tossed with a little olive oil and salt, and baked or wok-fried to create a healthy and delicious snack. 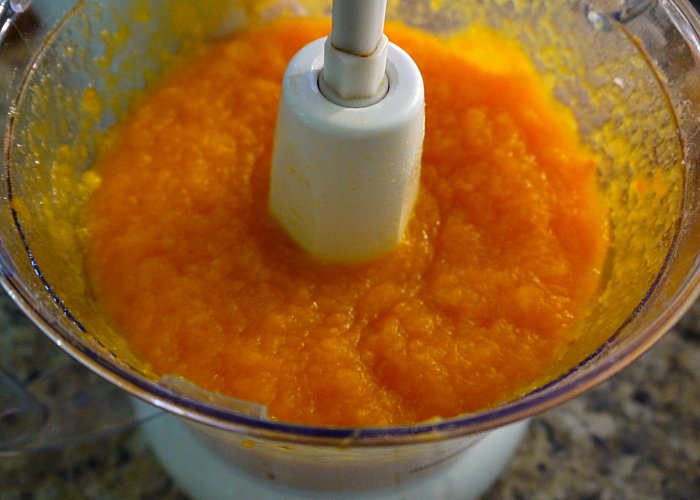 Fresh pumpkin puree ready for recipes. This is SO much better than canned pumpkin!

After you’re done using your jack-o’-lantern as a decoration (and you’ve removed the seeds for eating as per tip #1), you’ll want to make pumpkin puree.

Obviously you’ll want to do this before your jack o’ lantern is showing signs of spoilage. Whole pumpkins can be stored for many months, but once they’ve been carved, they should be used within a few days.

On Tyrant Farms, we have detailed instructions showing you how to roast pumpkin seeds AND make pumpkin puree.

It may sound a bit odd at first, but pumpkin pickles are actually really tasty. They’re a great way to preserve a lot of pumpkin if you have too much to use before it spoils or your freezer is already full of pumpkin puree. 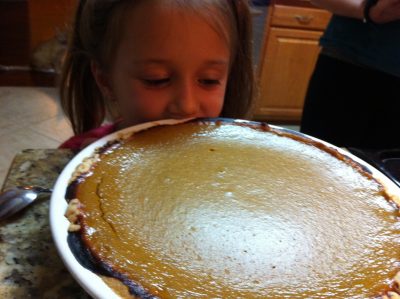 Our adorable niece waiting for a pumpkin pie to cool at Tyrant Farms.

When most people think of eating pumpkin, they typically think of the classic American pumpkin pie. Nothing wrong with that, since pumpkin pies are delicious and can even be pretty darn healthy as well (watch the sugar and use a whole grain pie crust).

Use your homemade pumpkin puree with this pie recipe.

5. Make your own pumpkin spice latte.

Instead, why not make your own pumpkin spice lattes using pumpkin puree from your jack-o’-lantern? Make your own at home with this easy recipe. 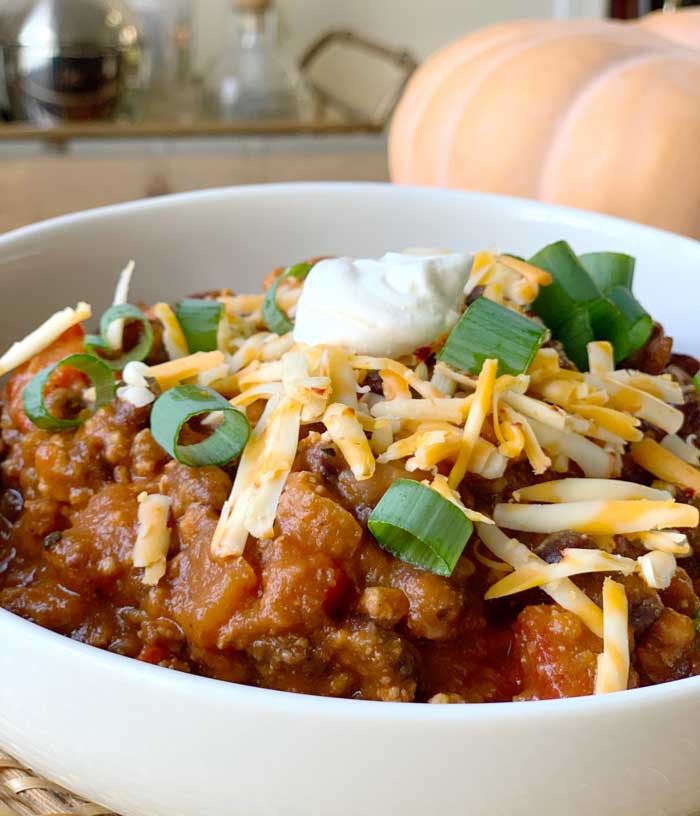 Pumpkin chili is a delicious and seasonal way to warm up on a chilly fall day. We can say with certainty that this pumpkin chili with turkey and black beans recipe is amazing.

7. Dehydrate your own pumpkin pie leather.

Another great way to use up your pumpkin is to make pumpkin pie leather aka pumpkin fruit leather.

They’ve got the flavor of pumpkin pie but are great for on-the-go, making them an excellent seasonal snack for kids. If you don’t already have one, we highly recommend getting an Excalibur dehydrator to make these and other dehydrated treats.

8. Bake some pumpkin bread or muffins.

Homemade pumpkin bread or muffins are sure to be a hit at any fall gathering, especially if you toss in a few chocolate chips!

If you don’t like pumpkin or really feel you can’t use all of yours, you may want to share some with your pet.

Many animals such as chickens, pigs, and even dogs can have pumpkin. Just be sure to do your research or talk to your veterinarian before making changes to your pet’s diet.

You’ve probably had apple butter before, but pumpkin butter is also a tasty way to use your excess pumpkin.

Pumpkin butter is quick to make and can be eaten on toast, crackers, or frozen for later use.

You can replace butternut squash with pumpkin in any squash ravioli recipe you find on the web.

Pumpkin for breakfast? Dang right. Disappearing whole wheat pumpkin spice pancakes will have you and your kids scrambling for a seat at the breakfast table. 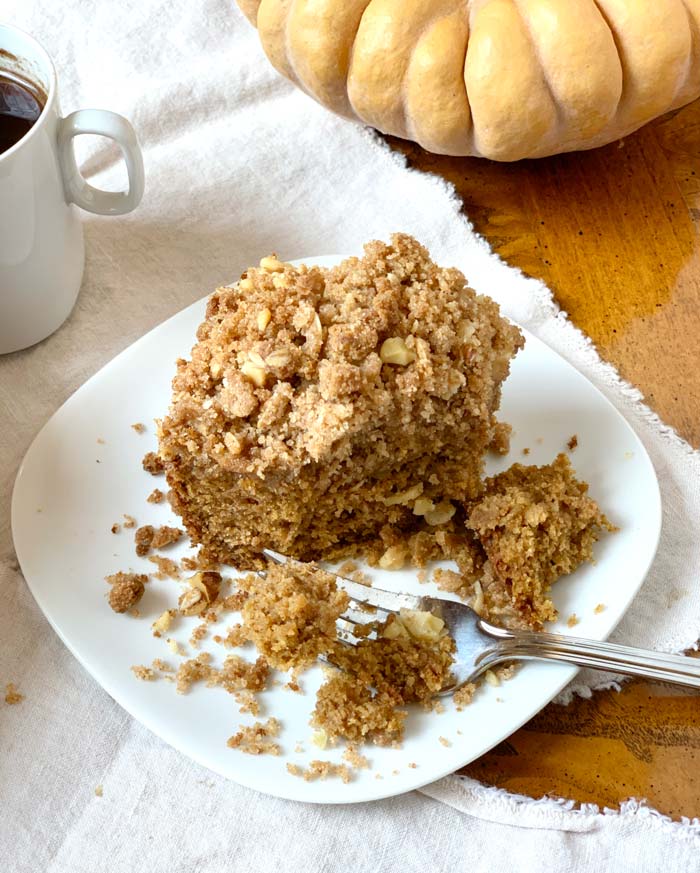 Speaking of breakfast, the best coffee cake we’ve ever had is this fall harvest coffee cake with apples and pumpkins. This treat is far better than any trick. (Oof, that was bad.) 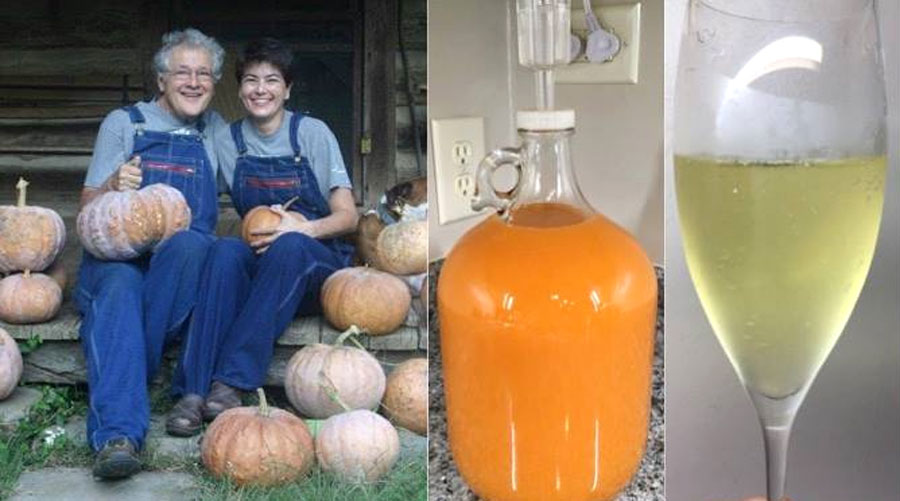 Our friend’s Tony and Andrea and their amazing pumpkin champagne (technically sparkling wine).

Ok, people from the actual Champagne region of France would stone us if they heard us calling a sparkling wine made from American pumpkins “champagne,” but this pumpkin sparkling wine can at least dress up as champagne on Halloween.

Halloween pumpkins are an oft-overlooked source of food waste. Rather than treating them purely as a throw away holiday decoration, utilize them as the nutritious, delicious, history-rich food that they are.

We hope the creative uses for Halloween pumpkins outlined above provide you with delicious food, save you money, and help keep food out of our landfills!

So how are you going to use your jack-o’-lantern this year?

About the Author: Susan

Cofounder of GrowJourney.com. Organic gardener, plant geek, and heritage breed duck mom. Susan earned a B.A. in Biology from College of Charleston, worked as an ACSM certified personal trainer, and as a research assistant in addiction psychiatry at the Medical University of South Carolina (MUSC). She puts her strong technical research background to work creating organic gardening educational resources for GrowJourney. Foraging, cooking, fermentation, and mixology round out her other interests. In addition to their collaboration on GrowJourney, Susan and her husband Aaron are cofounders of TyrantFarms.com, a popular blog dedicated to garden-to-table cooking, foraging, wild mushrooms, heritage breed ducks, and parenting.