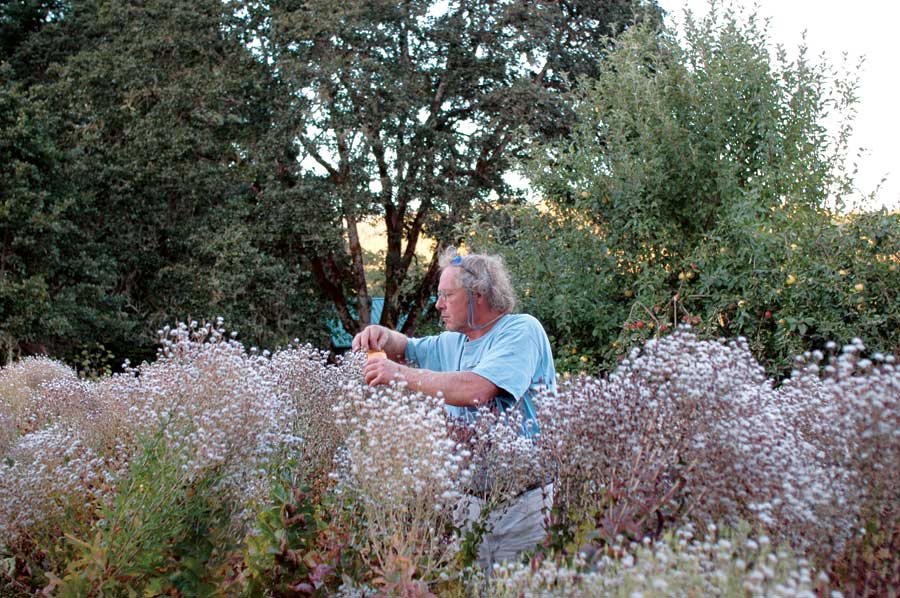 Frank Morton inspecting the progress of lettuce seeds at Shoulder to Shoulder Farm.

We’ve been in love with Frank’s seeds for years (sold via Wild Garden Seeds), especially his lettuce varieties, which are always incredibly vigorous, producing large yields of delicious greens in a dizzying array of colors, sizes, textures, and shapes.

Varieties of open-pollinated lettuce growing in our South Carolina gardens, originally bred by Frank Morton. Observe the different stages in their life cycle: Left: beginning to form flowers/seeds. Center: mature head of leaf lettuce. Right: dense bed of lettuce ready to be thinned out, leaving behind the most vigorous plants.

New heirlooms are open-pollinated varieties bred from other, often older heirlooms. This is a critical component of agro-biodiversity: taking care of the genetic “books” already in the library while also writing new books.

Who owns seeds and their gene sequences?

There are two general lines of thought when it comes to seed breeding:

1. The “inventor” owns exclusive rights to the seeds/life.

On the most extreme side of this line of thinking are the massive biotech companies that spend an average of $136 million dollars per genetically engineered plant trait, the most common trait being creating plants that don’t die when sprayed with herbicides such as RoundUp. For those companies to recoup their investment requires that lots of their proprietary seeds are sold around the world in bundled technology packages which also include their proprietary poisons.

This isn’t a new mindset. It was codified into law in the US by the 1930 Plant Patent Act, thanks largely to the efforts of Luther Burbank, a famous botanists and plant breeder.

2. Nobody and everybody owns the seeds/life.

The other line of thinking is that all human beings collectively “own” the genes of our food crops, e.g. our seeds belong to “The Commons.” After all, plants and their genes were here long before we were (they’re not a novel invention comparable to computer software).

Plus, our ancestors bred these plants and passed them (and their genes) forward to us without any exclusive ownership claims. This line of thinking is perhaps best exemplified by the famed Quaker botanist Dr. Elwyn M. Meader who bred over 70 varieties that he gave away to the public “as payment for his space on the planet.”

This second line of thinking tends to be much more common amongst organic farmers and plant breeders, including Frank Morton. That’s why Frank has donated so many of his “new heirlooms” to the Open Source Seed Initiative, rather than claiming exclusive ownership of them.

That means you, Frank, and 7+ billion other human beings on the planet all collectively own the seeds bred on his farm. We all have a shared responsibility to preserve them, improve them, and perhaps even use them to breed new heirloom varieties if we’re interested and able to do so. That’s how regionally-adaptive, resilient, biodiverse farm/food systems are built, and you can be part of that process. 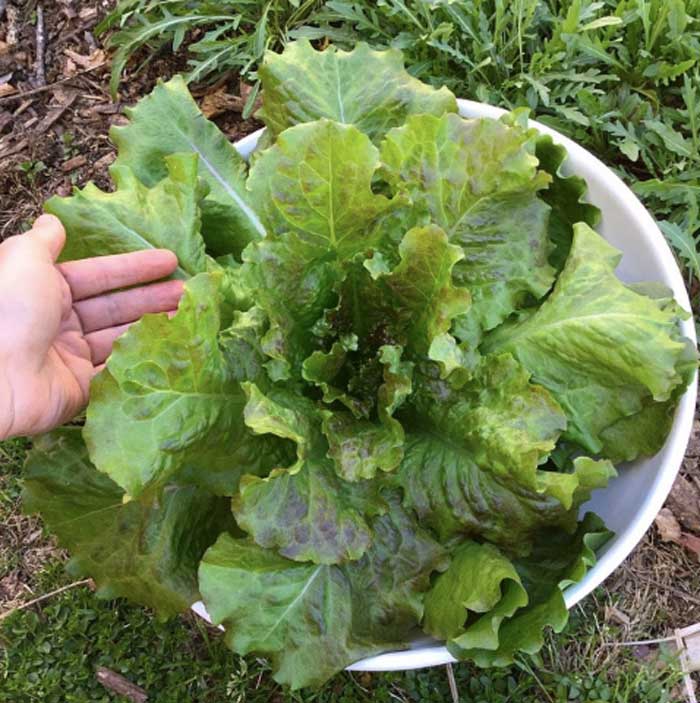 A beautiful head of lettuce grown in our garden but bred by Frank Morton & team.

For you gardeners out there: we hope this info will help you further appreciate the “grow journey” your seeds have been on before they came into your care. Nurture them, share them, breed them, and pass them forward! After all, they belong to you. And to everyone else too.

Frank Morton in the news

Frank Morton and Shoulder to Shoulder Farm made national news due to the challenges they and their farming neighbors in the Willamete Valley faced when compatible, genetically engineered, wind-pollinated crops were planted in their area for testing without any notice given to the local farmers/seed breeders. This put their seed crops and livelihoods in peril.

If you want to read more about the challenges Frank and other farmers have faced in dealing with this issue, read their own words.