You’ll never look at a Halloween jack-o-lantern the same way again after you learn these six amazing pumpkin facts. In fact, we hope you’ll invite “jack” inside for dinner when Halloween is over.

Many people are shocked to learn that in addition to 50 grams of sugar, one of the secret ingredients in your $5-6 pumpkin spice latte from Starbucks is berries. 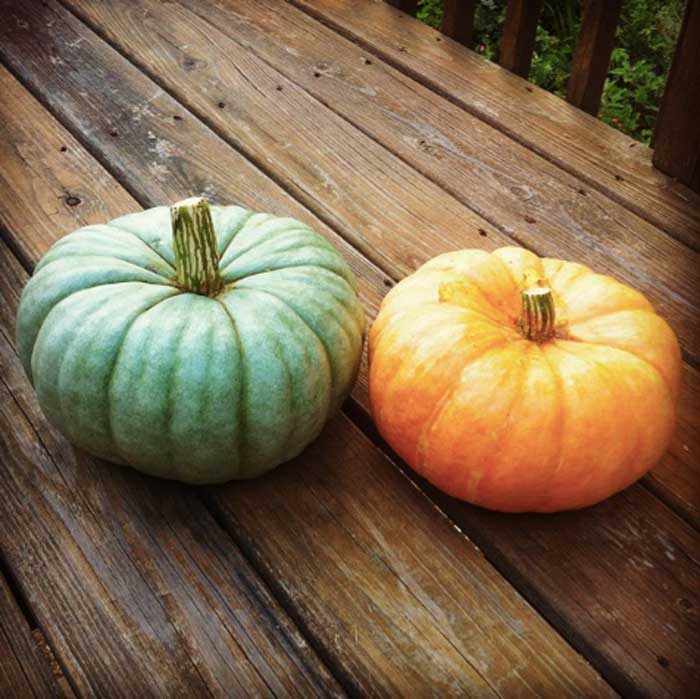 Rouge vif d’etampes and Jarrahdale, two heirloom pie pumpkins. Which one of these two berries would taste better in spiced coffee? (Yes, pumpkins are berries.)


2. The original Jack-o’-Lanterns were made from a vegetable.

Our modern American versions of Halloween and the Jack-o’-Lantern are marvelous cultural mashups of “New World” & “Old World” European folklore whose origins date back thousands of years. These traditions include elements of Samhain (the Gaelic harvest festival) as well as All Saints Day (a Catholic celebration).

Pumpkins are native to America, not Europe. Yet European fall harvest festivals and the jack-o-lantern long predate contact with Native American populations who bred pumpkins.

So what were the original jack-o-lanterns made from? 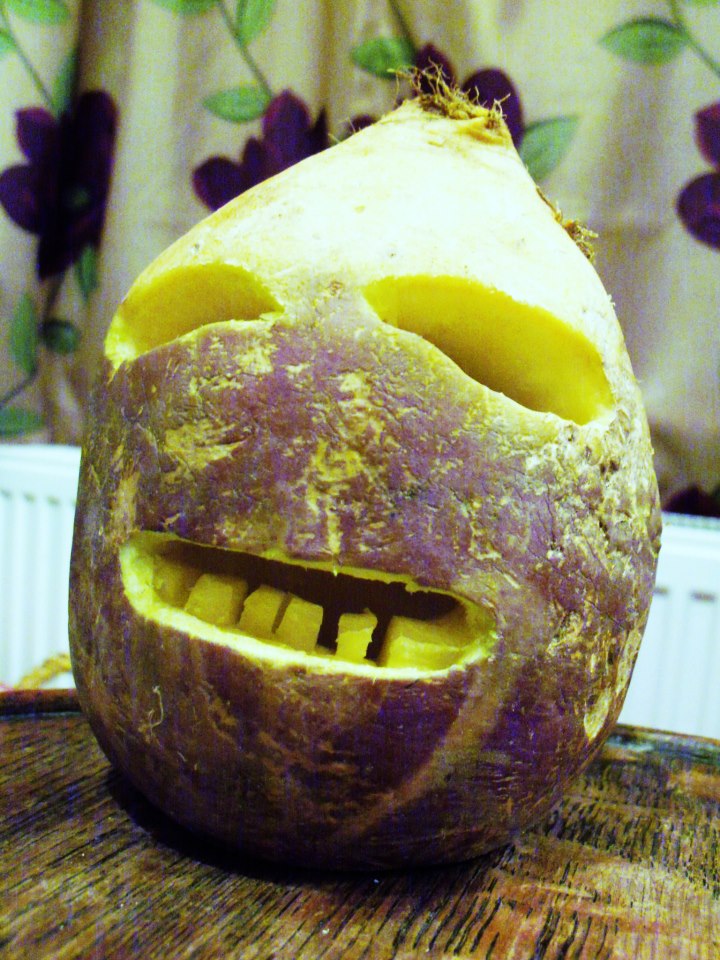 Trick-or-turnip!? Turnips were the original European jack-o-lantern that served to ward off evil spirits. Photo credit by Bodrugan – Own work, CC BY-SA 3.0, Link

3. Pumpkins are one of the oldest cultivated plants in the world.

Agriculture developed in multiple regions around the globe during the Neolithic Revolution at the end of the last Ice Age.

One hot spot of early agricultural activity was in modern day Mexico, where beans, squash (which include pumpkins), corn, and other plants were domesticated in close succession. These plants were not grown in single-species monocultures, they were planted in dense, biodiverse polycultures that we now call “milpas.”

The most common plants in these native cropping systems were corn/maize, beans, and squash, known collectively as the “Three Sisters” to the societies that grew them (or “Four Sisters” where sunflowers were prominent).

An artist’s depiction of an Iroquois family tending to their beans, corn, and squash. The Three Sisters and Four Sisters polyculture companion plant system was adopted by Native American agricultural societies throughout the Americas. Image by New York State Museum, subsidiary of State of New York Dept. of Ed – http://www.nysm.nysed.gov/IroquoisVillage/images/growingfieldspanlg.jpg, Public Domain, Link

Pumpkins are a type of winter squash, and were among the earliest domesticated plants on earth. Just how old are squash and pumpkins?

4. Today, China and India produce far more pumpkins than the US and Mexico.

Was the pumpkin you bought for your front porch decoration grown in the US or elsewhere? It’s hard to say for sure.

The US now grows over 1.5 billion pounds of pumpkins per year. 95% of our pumpkins are grown in the state of Illinois.

85% of all pumpkins grown in the US are produced by Libby, a subsidiary of Nestlé, the massive Switzerland-based company that is also the world’s largest food company by revenue. 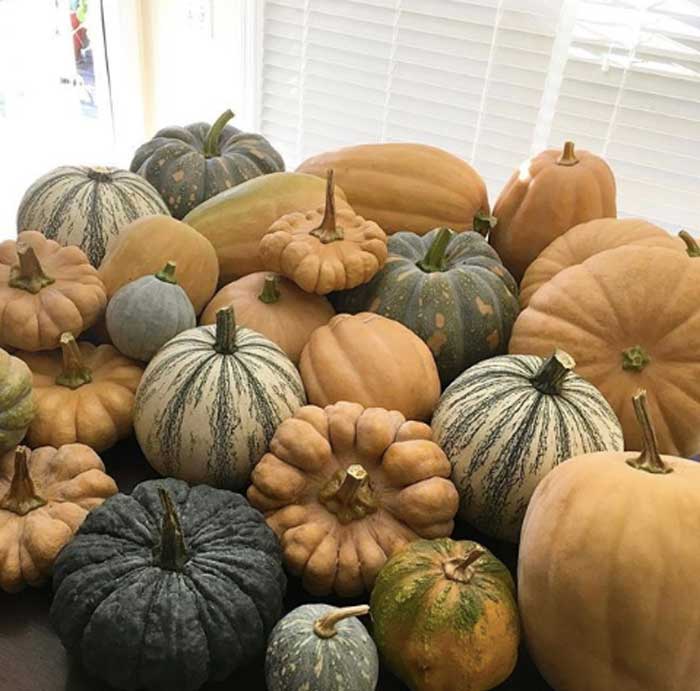 Pumpkins and winter squash come in all shapes, sizes, colors, and flavors. We know where these came from because they all grew within 100 feet of our house.

US pumpkin production is dwarfed by other countries, especially China and India, which produce about 5x and 3x more pumpkins than the US, respectively. But most of the pumpkins we import are actually grown in Mexico.

So where are all of our jack-o-lantern pumpkins coming from?

Your jack-o’-lantern pumpkin was probably grown in either Illinois or Mexico.

5. The world’s largest pumpkin weighs as much as a cow.

What’s the largest pumpkin ever grown? Well, it didn’t come from Illinois, Mexico, or China. It came from Belgium.

*Not an actual picture of the world’s largest pumpkin, but this is approximately the same size. Image by Johan Fredriksson, CC BY-SA 3.0, Link

To put that into perspective, the average male cow weighs 2,400 pounds. (*Please do not try to make a jack-o’-lantern out of a cow.)

6. All parts of a pumpkin plant are edible, but you might not want to eat yours…

We’ve grown a lot of pumpkins over the years. We love turning our pumpkin “berries” into pie, pudding, bread, and other goodies. 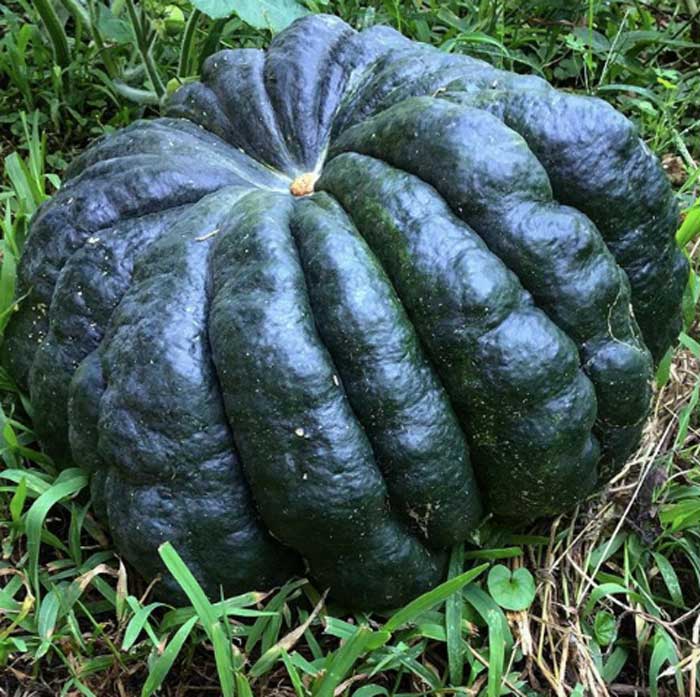 Our favorite pumpkin is the ‘Black Futsu,’ a Japanese heirloom. It’s a relatively small pumpkin, but the flavor is divine. It’s so sweet and nutty by itself that we usually don’t even add sugar to it when making it into pies and puddings.

We also love roasting pumpkin seeds, which are loaded with protein, good fats, and fiber. The best seed pumpkins we’ve ever grown are Austrian Styrian pumpkins, which are also delicious eaten raw. 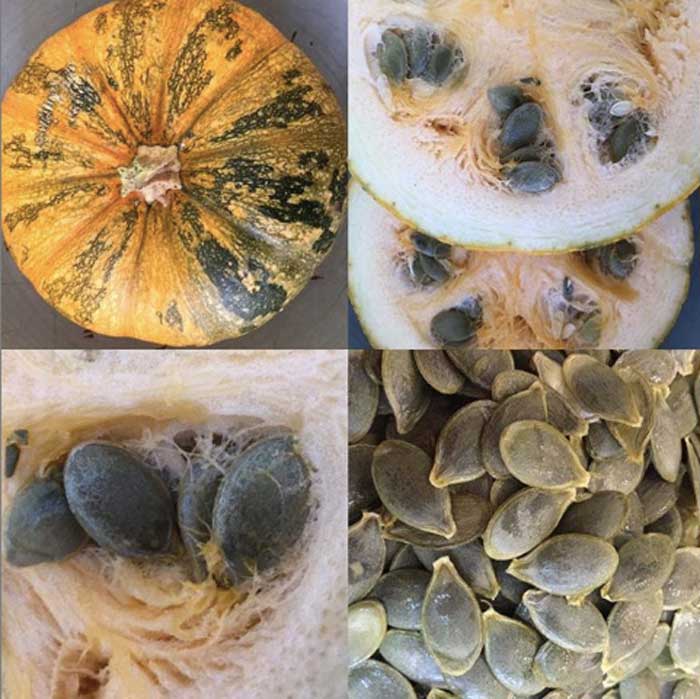 A lot of people don’t realize that all parts of the pumpkin are edible, including the flowers and leaves.

We use our male pumpkin flowers as a chopped salad garnish, as a stuffed savory dinner dish, or pan-fried into a breakfast pancake. (The female flowers should be left to set fruit.) 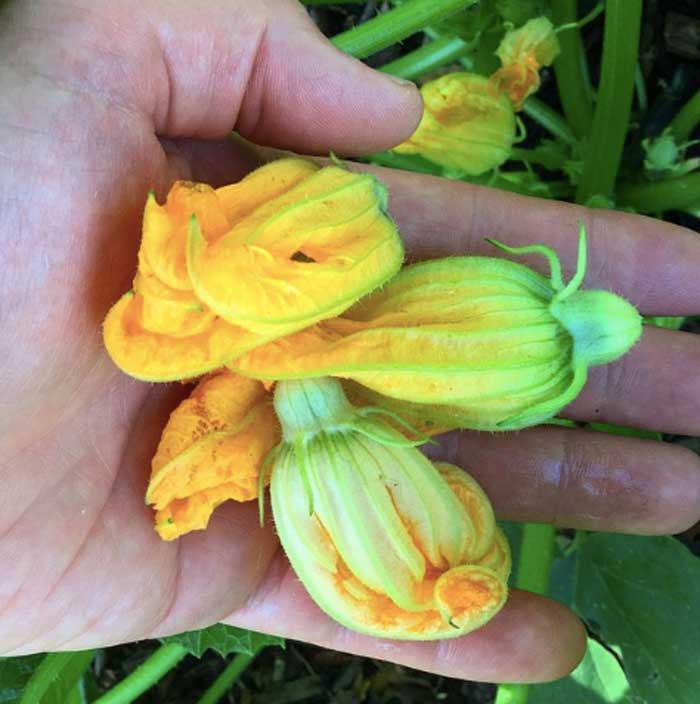 Pumpkin and squash flowers are edible, and make delicious treats. These are male flowers, not female flowers (leave the females to set fruit). The female flowers have miniature pumpkins/squash on the base of the flower and are easy to distinguish from the male flowers.

Pumpkin leaves are a vitamin-rich edible vegetable that are best harvested and cooked when young and tender.

We grow our pumpkins organically without any herbicides or insecticides. We also don’t use synthetic fertilizers (we use composts and worm castings).

If we happen to have a wet period that causes powdery mildew on our pumpkin leaves, we’ll use our own homemade milk-water solution that’s been scientifically proven to be more effective than conventional fungicides. Bottom line: we’re not too worried about what’s in or on our pumpkins when we eat them. 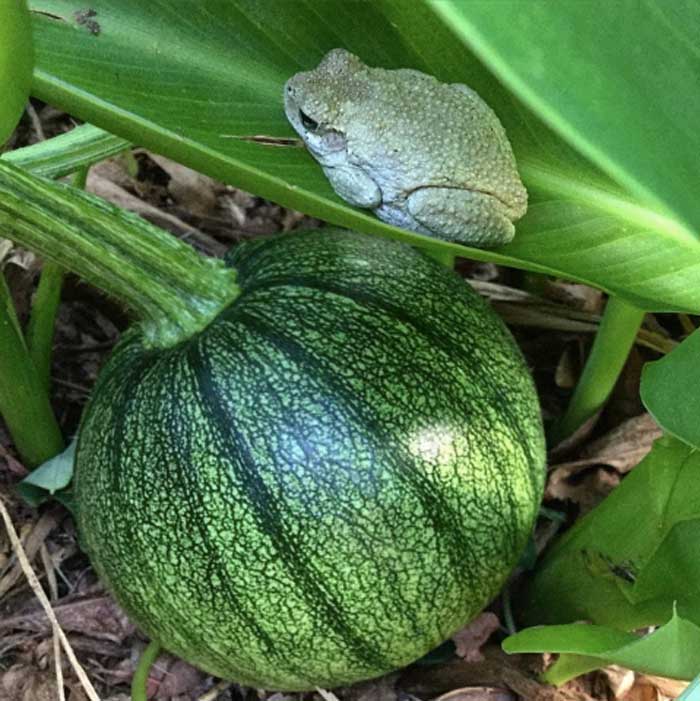 A young pumpkin growing at Tyrant Farms, as a tree frog looks on. Frogs and other amphibians are particularly susceptible to pesticide exposure, which is one of many reasons we never use synthetic pesticides.

But crops that are NOT grown for human food consumption–such as pumpkins grown for decoration or even conventional garden seed crops–are virtually unregulated.

So when Environmental Working Group (EWG) puts pumpkins/winter squash on the list of  crops with a “high pesticide residue score,” they’re only referring to pumpkins/squash grown for human consumption. They’re NOT referring to jack-o-lantern pumpkins grown for ornamental purposes.

Unfortunately, there’s no way to know what pesticide residues are on or in your jack-o’-lantern unless you grew it yourself or managed to find a pumpkin grown on a certified organic farm. 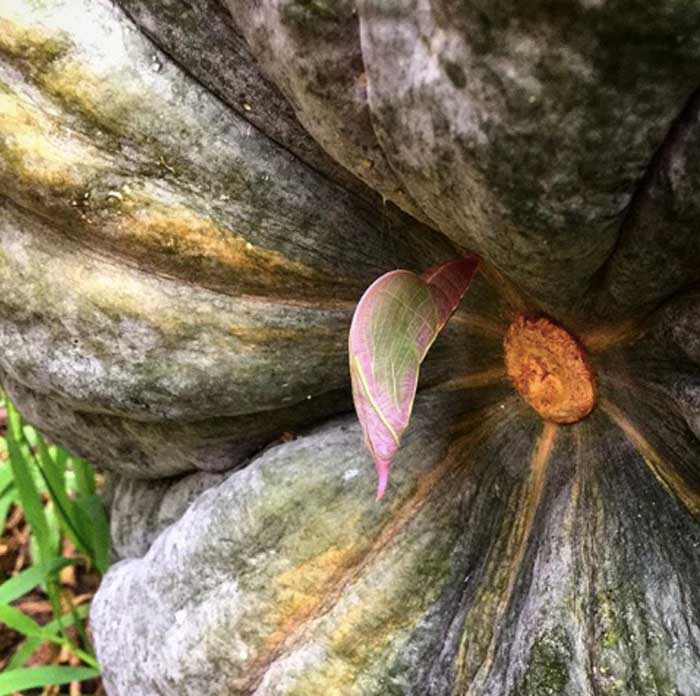 A Cloudless Giant Sulphur butterfly (Phoebis sennae) just emerging from its chrysalis (the pink pointy thing) that was attached to the underside of one of our pumpkins. What would have happened to this butterfly if we’d sprayed it with an insecticide?

Can you eat a jack-o-lantern?

Our advice: if you’re planning to have a jack-o-lantern or decorative fall pumpkin(s) on the porch, and you’d like to eventually eat your pumpkin rather than throw it away, try to grow your own organic pumpkin or source it from a USDA certified organic farm.

Also, as The American Academy of Pediatrics says, pregnant women, infants, and young children are much more likely to be harmed by pesticide exposure than adults, so this tip is especially applicable if you plan to serve your pumpkin to someone in these categories. 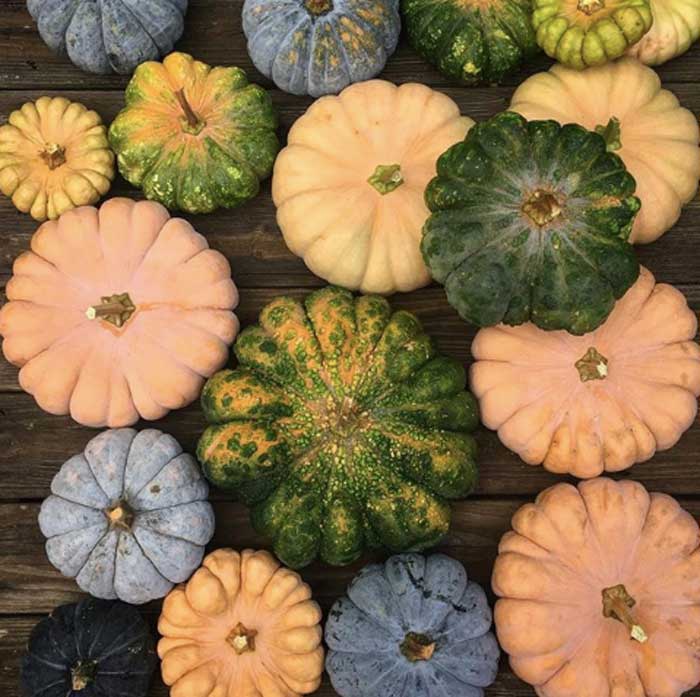 A colorful assortment of winter squash and pumpkins from Tyrant Farms.