Why and how to grow buckwheat

If you asked most gardeners if they know what buckwheat actually is or whether they’ve ever grown it, the answer would likely be “no.” That should change…

Buckwheat is a high protein (up to 12%) “pseudocereal.” This simply means it is grain-like, but since it is not in the grass family, it’s not considered a true cereal crop. Buckwheat also contains the important amino acid lysine which is rare in cereal grains.

What is buckwheat used for?

Buckwheat is a remarkably versatile plant with a huge range of uses, including:

Buckwheat as food for people:

You can grind buckwheat flour from hulled or un-hulled buckwheat. (Hulled buckwheat is also used for groats). Buckwheat does not contain gluten, making it a good alternative carbohydrate for people with gluten sensitivities.

The very young leaves of buckwheat are also edible, and can be marketed as “buckwheat lettuce.”

The entire buckwheat plant (leaves, flowers, and seeds) is popular with poultry or hogs.

Buckwheat honey is a rich, dark colored honey made by honeybees who forage pollen and nectar from buckwheat flowers. In addition to honeybees, buckwheat flowers also attract a wide range of other pollinators and predatory insects. 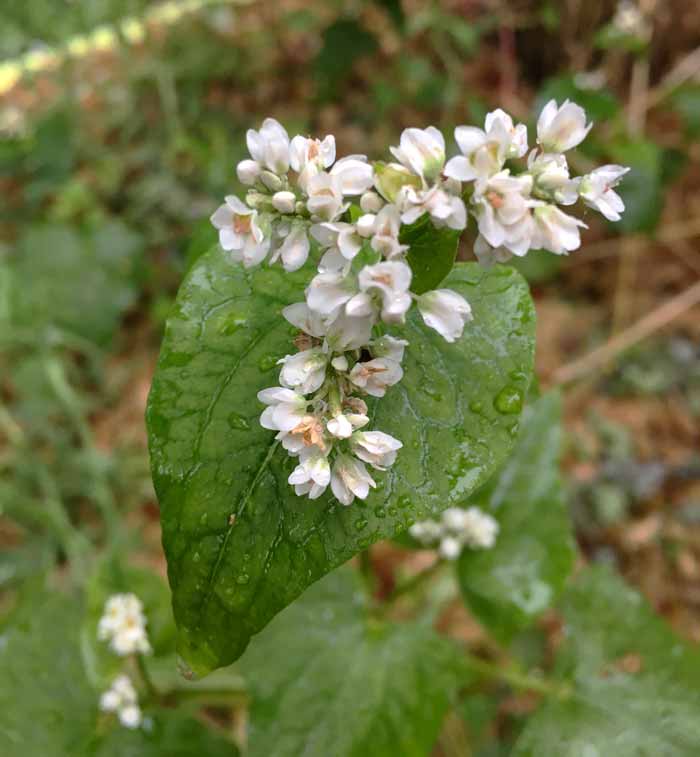 These insects help pollinate other nearby food crops in your garden/farm, and control pest insect populations.

Another use for buckwheat: improving soil health. Buckwheat is an easy-to-grow cover crop that protects the soil from UV damage. If you have a patch of bare soil or a spot between annual plants where you want to grow a quick-maturing flowering plant, simply scatter buckwheat seeds on the soil surface (no seedbed prep required).

When the plant dies, its nutrient rich roots and aboveground biomass are decomposed by soil organisms, building the fertility and structure of your soil.

How to grow buckwheat

The basics of growing buckwheat: 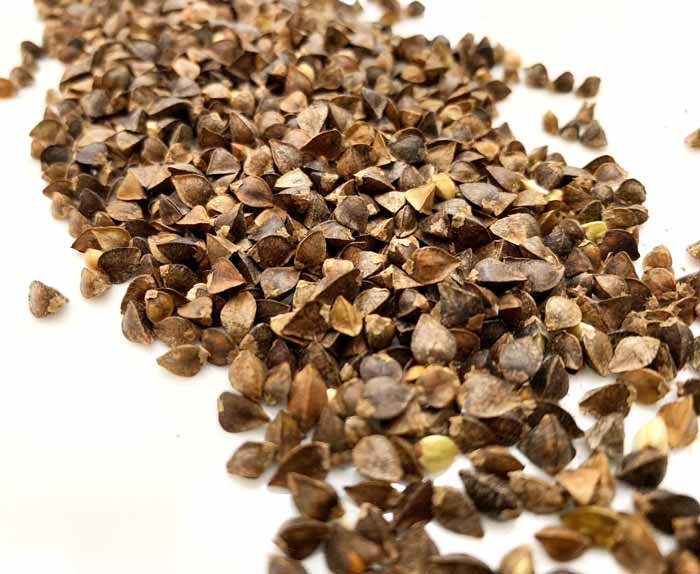 Mature buckwheat seeds ready to be turned into food or used to grow the next crop of buckwheat.

Japanese buckwheat (also called Silverhull buckwheat) is considered the best cultivar for both culinary and garden-health uses. Gardeners across the country who give buckwheat a try often express surprise that something they planted as a novelty quickly became one of their favorite crops.

Buckwheat is one of the easiest plants to grow and the least fussy about space and timing. You can start additional seeds throughout the warm months in between your other garden plants. Buckwheat plants die at first frost.

Even if you aren’t interested in growing your own grain, this is a plant that has a multitude of benefits for a healthy garden. (See list of buckwheat benefits above.)

Buckwheat almost explodes out of the ground. Most people don’t even bury the seeds, they just broadcast, or throw handfuls everywhere. (It even germinates and grows fine when the seeds are scattered on mulched beds.) This makes buckwheat ideal for creating a fast growing “green” mulch on bare soil that would otherwise be damaged by the sun or overrun with weeds.

Instead of losing your hard-earned soil fertility to erosion and runoff, buckwheat plants are excellent for storing nutrients in their stems, leaves, and roots until you’re ready for other crops to utilize it. Then you can chop the buckwheat plants and let them compost right where they fell to release nutrients back into the soil with the help of soil microbes.

In the meantime, buckwheat is also improving your garden with some of the best shallow-nectary flowers for beneficial wild insects and honeybees that can be grown—we’re constantly amazed at the diversity of native bees, syrphid flies, ladybugs, soldier bugs, fireflies, minute pirate beetles, predatory/parasitic wasps, and more that can be found in our buckwheat patches.

If you want to increase your pest-controlling ecosystem within a season or two, succession sowing buckwheat is extremely effective. Best of all, buckwheat fits right in between other plants since it needs little fertility to grow. It’s used as a cover crop that breaks up and improves heavy, impoverished soils for this reason.

When to harvest buckwheat seeds:

Once 3/4ths of the developing buckwheat seeds turn brown, cut the plants and thresh the seeds loose on an old sheet. Another option is just to cut off the seed clusters that are mature, then leave the plant and remaining flowers to continue setting and maturing new seeds. 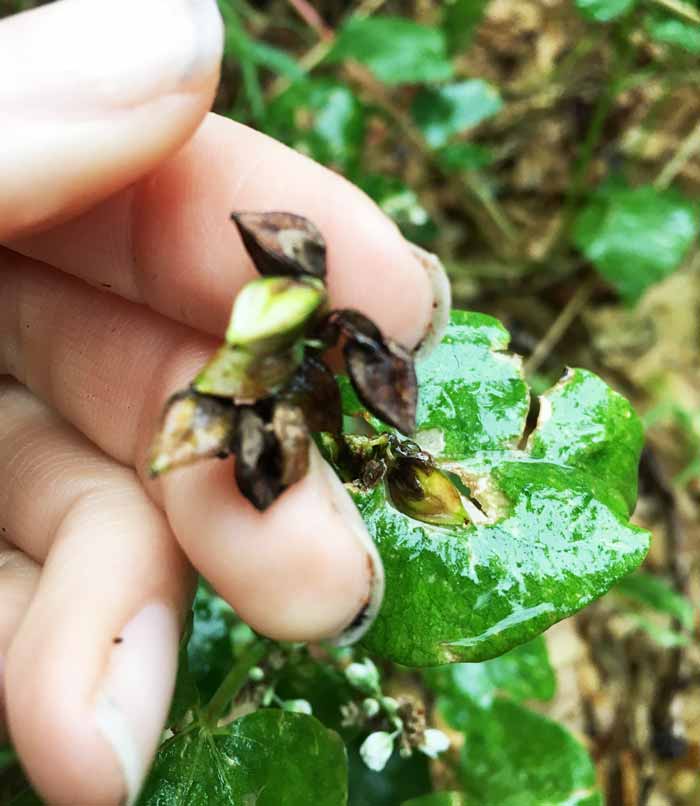 Sorry for the grainy image! Here’s a cluster of buckwheat seeds (on a rainy day) that are mature enough to be removed from the plant and dried for long-term storage.

Once the buckwheat seeds have been removed from the plant, allow them to dry indoors for at least one month before storing in airtight containers.

Buckwheat can be planted any time during the warm season. The plants grow quickly, producing clusters of small white flowers with a pleasant scent.

If you keep a packet of buckwheat seeds near your produce basket it becomes a quick and simple task to sprinkle them into any gaps created by harvested vegetables. For instance, when your hardneck garlic is uprooted in early summer or your bolted spring greens are fading away after making seeds, there’s no need to look at bare earth until fall – just sprinkle buckwheat seeds on to the soil surface!

Buckwheat is a “good neighbor” plant that brings out the best visual qualities of adjacent crops without stealing sun and nutrients. Best of all, your buckwheat will attract beneficial insects into the vicinity, so it’s a perfect accompaniment to any vegetable or flower that struggles with pest pressure or pollination during the summer.

Buckwheat flowers’ white hue means they fit into virtually any garden design. Planting it throughout the landscape gives you a unifying visual element to tie everything in the edible border together. Depending on where it is grown and how long the growing season, buckwheat can reach anywhere from 12-36″ in height. If you prefer shorter plants but you live in an area where it becomes taller, you can shear your plants to the right size (which also encourages additional blooms). 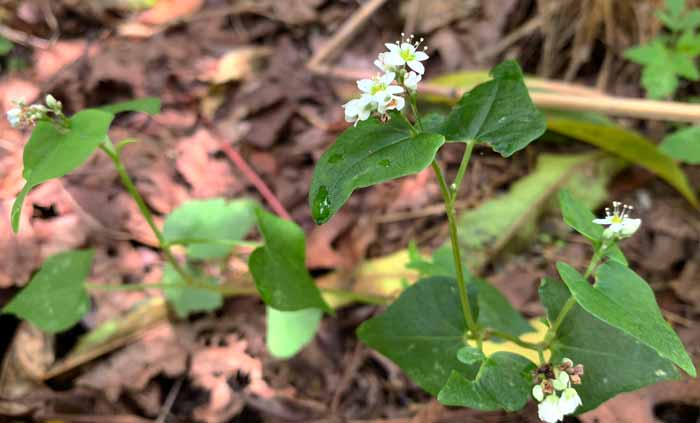 A flowering buckwheat plant in a patch that has re-seeded itself on top of the green roof of our duck house. We haven’t sown new seeds in this spot in over three years!

Buckwheat readily reseeds itself — which you can view as a money saver. But you can avoid buckwheat reseeding itself by repeatedly cutting the blooms after pollinators have finished with them but before they begin to form seeds (e.g. as soon as the flowers turn brown).

Due to its frothy clusters of small white blooms, buckwheat might be the ultimate edible “filler” plant when using the “thriller, filler, and spiller” container garden formula. It looks a lot like baby’s breath, one of the most popular florist “fillers” of all time.

Another aspect that makes buckwheat a natural for this role is that it doesn’t take up much space or require very rich soil. When you need a container plant companion that won’t crowd a heavier-feeding crop, buckwheat is almost a no-brainer. When potted buckwheat begins to flower you can either keep it deadheaded or go ahead and succession sow an additional crop that will take over when the previous one goes to seed. Even a small container garden can produce enough succession-sown buckwheat grain for some buckwheat tea or a novel quantity of flour.

Consider using a classic looking combination of buckwheat paired with a short fruiting rose… ‘Frau Dagmar Hartopp,’ ‘Mr. Bluebird,’ ‘William III,’ ‘Bella Nitida,’ ‘Rainbow’s End,’ or Rosa wichurana as the “thriller.” You could just use these two on their own or you could add a tasty cascading deep green “spiller” as an edible replacement for English ivy.

Some good edible “spiller” options include: prostrate rosemary, vining beans, a sweet potato slip, trailing nasturtiums, or a single crown of asparagus (within a pot it will flop over the side resembling a fern—at the end of the season you can plant your asparagus out as a garden perennial or save it in the pot until next season to reuse in the same role).

We hope this information was helpful and that you’ll grow buckwheat in your warm weather garden from now on.

About the Author: Susan

Cofounder of GrowJourney.com. Organic gardener, plant geek, and heritage breed duck mom. Susan earned a B.A. in Biology from College of Charleston, worked as an ACSM certified personal trainer, and as a research assistant in addiction psychiatry at the Medical University of South Carolina (MUSC). She puts her strong technical research background to work creating organic gardening educational resources for GrowJourney. Foraging, cooking, fermentation, and mixology round out her other interests. In addition to their collaboration on GrowJourney, Susan and her husband Aaron are cofounders of TyrantFarms.com, a popular blog dedicated to garden-to-table cooking, foraging, wild mushrooms, heritage breed ducks, and parenting.