Hydroponic Vs. Organic farming: what’s the difference? Find answers to your questions here!

We’re big proponents of organic agriculture (large scale) and organic gardening (small-scale). We’re especially vocal in our support for organic no-till methods and permaculture farms which rely as much or more on perennial crops as they do on annual crops.

And, of course, we’ll shout from the rooftops about the importance and benefits of using organically-grown seeds. Organic farmer and seed breeder, Frank Morton, one of our heroes.

These methods of food and seed production are knowledge-intensive, requiring practitioners to appreciate the entire biological system in which they’re operating, not simply apply a menu of chemicals supplied by a salesman at set time intervals in a never ending game of whack-a-mole.

What does that mean?

Once you understand the fact that soil is a living medium teeming with billions of microbial organisms that have a dramatic impact not only on the health of the plants growing in them, but also on clean water, clean air, global atmospheric mechanics, and the health of other species (insects, amphibians, reptiles, etc), then this distinction makes a lot of sense.

What’s the difference between hydroponic, aeroponic, and/or aquaponic growing systems?

Hydroponic systems grow plants without soil while supplying plants nutrition to grow via a water-fertilizer solution. Usually, perlite, clay beads, gravel, etc are used to hold the plants in place.

Aeroponic systems are a subset of hydroponics that applies a mist-nutrient solution to the root systems instead of letting the roots grow submerged in water.

This method requires far less water than traditional hydroponics and allows the plant’s roots to breathe (get oxygen). Tower Gardens are a well-known aeroponic system.

Aquaponic systems stack functions by producing both animal protein (usually fish and/or crawfish) and using the excreta from those animals to fertilize plants whose roots are growing in the water.

Which growing methods are better?

Every method of food production has pros and cons.

The main PROS of various hydroponic and aquaponic systems are that they:

1. Tend to produce more food per acre than traditional agriculture since they can grow vertically (we’ve all seen photos of plastic tubes stacked vertically with lettuce growing out of them.

The CONS of these growing systems are:

1. They use a bunch of plastic, metal, and energy (grow lights, air conditioning systems) rather than soil and sun.

2. The flavor and nutrient-density of the plants grown *may not be* on par with organic crops grown in biologically rich soil. (*This can vary greatly depending on the producer and the growing methods employed.)

Anecdotally, we’ve noticed a real lack in flavor in the hydroponic produce we’ve gotten from local growers in our area. But this may be more of an issue with specific producers, not the entire field of hydroponics.

There’s recently been a bit of hubbub in the organic farming world due to the fact that more and more non-soil-based urban farms and microfarms are applying to be certified organic.

Instead of growing plants in soil, many of these farms are using some type of hydroponic, aeroponic, and/or aquaponic systems. 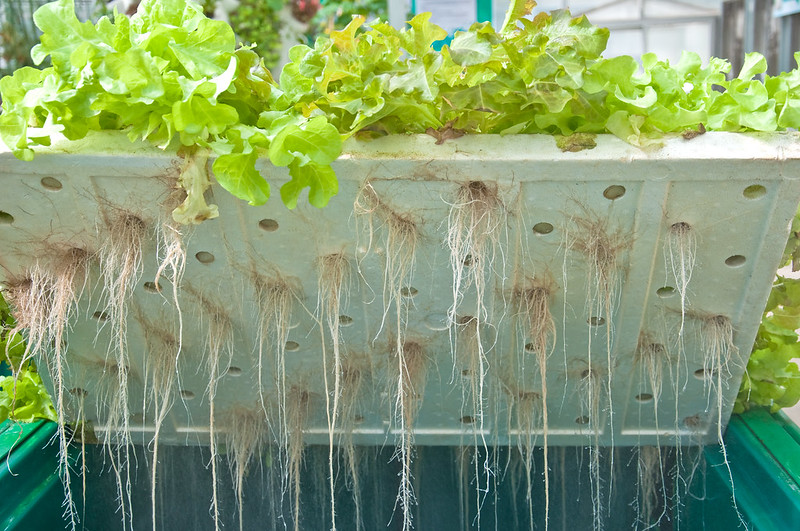 Image caption: Plants are adapted to work with soil microorganisms (namely bacteria and fungi) to feed and protect themselves. Can plants grown without soil be as healthy and nutritious as plants grown in biologically rich living soil? Given that organic farming has soil health at the core of its being, should plants grown out of soil be allowed to be certified organic? Photo credit: Roots of hydroponic vegetables, image by Aqua Mechanical Attribution 2.0 Generic (CC BY 2.0)

1. Since it’s inception, organic farming has focused on soil health, and feeding the soil.

Carbon-rich, biologically active soil has always been the aim of organic farmers. So organic farmers ask: how can you be certified organic if you’re not even growing plants in soil?

2. A traditional organic farmer has to buy or lease land, farming equipment, etc. and is then somewhat at the mercy of nature as to what yield they’ll produce. Extreme weather (which is increasingly becoming the new normal) can take a big toll on a farmer’s yield.

Weather isn’t a problem in an indoor hydroponic system. Hydroponic systems can also produce more food per acre (growing vertically) and growing continuously throughout the year even in cold northern climates.

Food production doesn’t just have environmental and economic consequences, it also has social consequences. Farmers are important, and they’ve been treated like dirt for decades by consumers and policy makers alike, rather than being loved like soil.

The USDA’s National Organic Program has long understood the importance of the farmer in our food ecosystem, and they’ve done a pretty good job of implementing policies based on this reality. People who eat organic food tend to understand this too, which is one of the reasons why being an organic farmer has proven to be a better career decision than being a conventional farmer.

At the same time, organic farmers, policy makers, and supporters/consumers have to be adaptable and open to the future. There will likely be 10 billion people on the planet by 2100. More of the world’s population is moving to cities. While balancing other factors, growing more food on less land can be a great thing (when externalities are truly accounted for).

With that in mind, we’d personally like to see hydroponic produce incorporated into the USDA NOP (or a sister program) in a way that balances the needs of all stakeholders affected. Easier said than done, we know.

Maybe that means creating a distinct, “biologically-grown hydroponic” certification wherein hydroponic growers are incentivized/rewarded for avoiding the same synthetic fertilizers and pesticides that are prohibited under the existing NOP guidelines for certified organic farmers.

Maybe that system could also require they use biologically based fertilizers and pest control methods rather than synthetics. At the other side of the chain, consumers can see that they’re getting something that’s safe and high quality, yet still distinct from traditional certified organic produce grown in soil AND distinct from conventional hydroponics.

Transparency in our food system? Imagine that…

Cofounder of GrowJourney.com. Aaron is an organic gardening teacher, duck evangelist, writer, health nut, and entrepreneur. He's also a farm consultant for Oak Hill Cafe & Farm, a no-till, permaculture, farm-to-table restaurant in Greenville, SC (right down the street from his alma mater, Furman University). In addition to their collaboration on GrowJourney, Aaron and his wife, Susan, are cofounders of TyrantFarms.com, a popular blog dedicated to garden-to-table cooking, foraging, wild mushrooms, heritage breed ducks, and parenting. Aaron also writes for Edible Upcountry Magazine, WordPress (.com), Daily Harvest Express, Healthy Minds and other food, health, and tech-related organizations. He serves on the board of the Diversified Agriculture Committee for the South Carolina Farm Bureau.